Why are so many former Unaccompanied Minors forced to leave France, even though they are following vocational trainings which the labor market desperately needs?

Moussa can really be described as lucky; he obtained a "Young Adult" contract after reaching adulthood. Many other former Unaccompanied Minors (MNA) pursue apprenticeship training center courses (CFA) in professions for which the labor market is short. And they've even found employers willing to offer them a permanent contract (CDI), which is also the most coveted type in the job market. But even all these do not help many of them; they have received, by the prefectures, the rejection of their demand to stay in France, accompanied by the Obligation to Leave the French Territory (OQTF). It obliges the person to leave France within the following 30 days and has a one-year duration. In Meurthe-et-Moselle, in January 2021, Réseau Education Sans Frontière (RESF 54) observed 70 young people in such conditions.

“The central issue for these young people remains the non-issuance of papers which prevents them from continuing their apprenticeship or work, even with the formal guarantee of a work contract, once they have reached the age of 18”, - explains Johan Chanal of RESF 54. “As for the protection of the Departmental Council, even if it sometimes lasts a few weeks or a few months for certain young people (at most up to the age of 21), it sometimes ceases on the very day of their majority. So, many young people are put on the streets, a plastic bag with some clothes in the hand - that are all the luggage they have”.

In 2019, nearly 17,000 children, mainly from Guinea, Mali and Côte d'Ivoire, were declared MNA according to a fact-finding mission for the Law Commission, prepared and presented in March 2021, in Nation Assembly.

This is exactly what Boybacar, one of the members of the group ACTION LES JEUNES 54! feares the most. He arrived in France 3 years ago, after having gone through dozens of twists.

“My uncle and I left Africa together, and, at the beginning, we went to Italy. But I had a lot of difficulties with the Italian language. So, we decided I come to France. I wanted to go to school and to get a job to improve my life. I just want to work, there is no work in my country. And, above all, we are very poor. "

In France, after months spent in a center awaiting the judge's decision whether he was a minor, Boybacar was finally officially recognized as such and was allowed to enroll in school. He is currently pursuing a CFA in masonry, a profession in great shortage in France. But this year, he turned 18. He received the rejection of his demand to stay in France. This is why he became a member of the ACTION LES JEUNES 54! “I come here to be with other young people, to change my ideas and the mood. My situation is very difficult, just like that of the others and we try to motivate ourselves. At the same time, I come for advice, to enrich and enhance my regularization file in France, to facilitate administrative procedures. It's easier when we get together, we have ideas and energy. We want to work and contribute to the French economy. But in order to do that, we have to be regularized. " 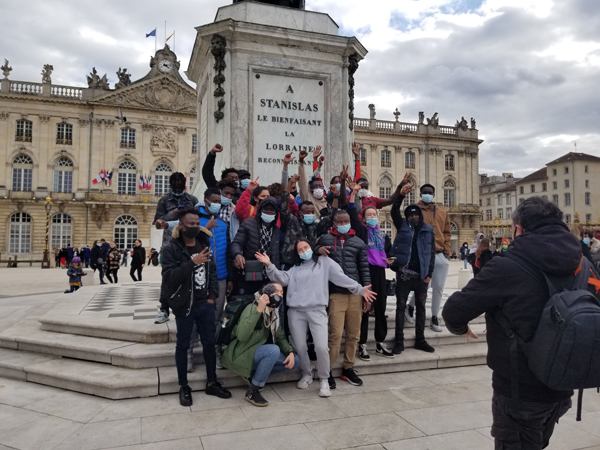 Photo above: Photo by Daan Stevens on Unsplash

A story and thousands more

In 2019, nearly 17,000 children, mainly from Guinea, Mali and Côte d'Ivoire, were declared MNA according to a fact-finding mission for the Law Commission, prepared and presented in March 2021, at the Nation Assembly, by two rapporteurs; one from La République en Marche and the other from Les Républicains.

“Welcoming these minors on French territory is a humanitarian duty. It must be organized by the public authorities with respect for the fundamental rights of the child, guaranteed by the International Convention on the Rights of the Child ratified by France, and in the best interests of the child, a notion that the Constitutional Council recently deduced from the 10th and 11th paragraphs of the Preamble of the Constitution of 1946 ”, says the report.

RESF 54 observed 70 youth receiving the rejection from the prefecture of their demand to stay in France, in Meurthe-et-Moselle , January 2021, even when they had found employers offering them a permanent contract (CDI).

But in practice, things are more complicated. When a foreigner comes to France and declares to be a MNA, before being taken in charge by Social Assistance for Children (ASE) and benefiting from the rights, the Children's Judge must declare that the foreigner is really minor. It is a procedure that often lasts for months, as witnessed by Moussa et Boybacar, une période pendant laquelle aucune scolarisation n’est proposé ; et pendant laquelle on peut facilement sombrer dans la victimisation et délinquance.

The argument for such a long duration is that many of those who declare to be minors may be, in fact, adults. So, they may be lying. An argument widely cited in several public statements. As well as inside the above cited report of the National Assembly, dedicated to the MNA delinquents. So widely cited that UNICEF France reacted immediately with a press release published on March 10, 2021, entitled “A parliamentary report on unaccompanied minors that worries”.

“While acknowledging the absence of solid statistics, the rapporteurs aggregate poorly objectified facts on the part of so-called 'false minors'. Armed with this observation, they propose to generalize control mechanisms such as the biometric file, the constraint on fingerprints, police cooperation with the countries of origin, the assessment of the minority during police custody, etc. , without questioning their impact on the effectiveness of children's rights - yet noted by many organizations interviewed ... UNICEF France recalls that unaccompanied minors (MNA) are children in danger, under article 375 of the code civil. They must be protected from the moment they are detected until a final decision is reached”.

Medicins du Monde: Most of the Unaccompanied Minors have not seen a doctor since arriving in France and 95% have no health coverage. They all present a degraded state of health ".

Hypotheses. General statements. Stricter proposals. Even without what was publicly launched in March 2021, the situation was and already is difficult. Not only regarding schooling, accompaniment, the possibility of falling into passivity and possibly crime. But also in health. Contrary to the general belief, MNAs' access to health care is extremely low in France, according to Medicins du Monde. “Most of them have not seen a doctor since arriving in France and 95% have no health coverage. However, they all present a degraded state of health. ", - declared the organization in a tribune, published in 8 October 2020 to denounce the serious condition of these children.

Constant conflicts, social injustices, pronounced inequalities between the development of countries, concentration of wealth in only a part of them, unemployment, violence, natural disasters, are the causes which increase each year the number of immigrants in the world. Among them, millions are children. In 2019, migrant children represented 12% of the total migrant population (UNICEF, 2020).

Oxfam France: Today, more than 68.5 million people around the world had to leave their homes to flee war, famine or the consequences of climate change. Half of them are children”.

Oxfam France, 2021, declared that children have a much higher percentage among migrants forced to leave for urgent reasons such as hunger, war or climate change. “Today, more than 68.5 million people around the world had to leave their homes to flee war, famine or the consequences of climate change. Half of them are children. This number is the highest one recorded by the United Nations since World War II », -declares the organization in its official website. Near 35 millions...

Among all these millions of minors who have left and leave their country each day, those who travel alone, without family, are undoubtedly the saddest part of this exile. And, among them, those who return to where they started, with only a small bag in their hands, after years of sincere efforts to reach a dream, are the part that goes beyond sadness...  (to be continued)

* This article is produced as part of the “Migration, Youth and Internet” project. It is written by Elda Spaho Bleta, volunteer of the local group Oxfam in Nancy, who paid close attention to the information given. The sources of the information are cited, and when personal advice is given, it is the sole responsibility of the editor. If, despite her attention, an error had slipped into the document, please report it to her by writing to [email protected] This article is published with the funds of the French Development Agency, Grand Est Solidarités et Coopérations pour le Développement (GESCOD), and with the support of Oxfam France. The content of the articles does not engage the structures previously named.

Disinformation and the creation of illusory truth