You have no residence and work permits, but you have found an employment contract. How to understand and use the "Valls" circular? Who benefits and the documents you need on your file.

Some time ago, we published an article explaining where to find the online list of open professions for foreigners in France and why it is very important to use as a compass to get a job and a legal status. Today, we will go a little further: we will see how you can value employment in France so to legally stay in this country.

What is the scenario?

Officially, we are speaking about "regularization of foreigners through labor ", in French "la regularization d'un étranger par le travail". It is about foreigners ’citizens of a country outside the European Union, the European Economic Area or the Swiss Confederation. According to the official website of the French public administration, the undocumented foreigner "can be provided, through exceptional admission, with a residence card with the title "employee - in French salarié" or "temporary worker - in French "travailleur temporaire".1 Simply put, the scenario is this: for different reasons, you are still not provided with regular residence documents even though you have been living in France for years. But finally, you have found an employer who is ready to offer you a promise to hire or an employment contract. It is a scenario both specific and general for hundreds of thousands of immigrants who have come to France. They are among the poorest and most sensitive groups in terms of social, financial, legal, etc. needs. Remember that, if the job position is found in the above mentioned list of professions open to foreigners, you have more chances for a positive answer and be provided with a residence and work permit. And to get out of the cycle of poverty. But, first, let's explain the context of this process.

How to understand and use the "Valls" circular to obtain documents?

Regularization of foreigners through labor is a practice not often used in France when it comes to the foreigners who have not been provided with legal permit of stay, even after spending many years in this country. But this practice is increasingly used in the face of labor shortages in several vital sectors in the country. As well as due to the pressure of the civil society which has argued and continues to argue, with studies and facts, that the majority of illegal foreigners (known in France as "les sans papiers"), which are estimated to be around 400 000 - 765 0002 , not only do they actually work (on the black) and do not benefit financially from the social assistance system, but they also contribute to France by paying taxes and social contributions, doing a lot of volunteer work, etc. However, unfortunately, they do not benefit from many rights and social services, because they do not have permit residence in France. It has been demanded that this entire contribution be recognized as a fact, a legal criterion and given an opportunity. "...This is the theme of the fight led by the collective ""Against the racketeering of undocumented workers' contributions"", which includes the union Finances Solidaires Publiques and GISTI, which denounces the clandestineness and non-benefit of most social rights in which people are placed even though they pay insurance and taxes »3, declares the association GISTI (Information and Support Group for Immigrants). 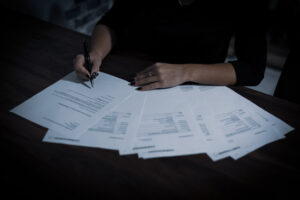 A certain opportunity has been given through a procedure that, legally, is known as by “the exceptional admission to the stay”. In French, the term is "admission exceptionnelle au sejour". So, we are not talking about a type of general admission, but about a treatment case by case. As you will understand below, this is not a genuine law which automatically brings the regularization even if the immigrant fulfills all the criteria. It is a circular. With an orientation, proposal, and non-binding character.

More precisely, in addition to the Labor Code and the Code of Entry, Residence and Right of Asylum of Foreigners in France (officially known as CESEDA), the legal basis on which this exceptional admission of stay is oriented is a document known as the "Valls circular"44, which you can read in full and download here above, in French. It is named after the French interior minister, Manuel Valls, who proposed it on November 28, 2012 for "a fair examination of some human truths". This circular is not imposing on the administrative structures, but merely proposing, guiding. Ultimately, the decision-making power belongs to the prefecture, more precisely to the will of the prefect, who is not obliged to give an affirmative answer even though the foreigner may have prepared a file proving that he fulfills all the criteria.

I explain all this because I very often meet immigrants who either think that they are sure to get the regularization in France since they fulfill all the cited criteria, according to the specific situations provided by the Valls circular, or who, after having submitted one or two times their file in the prefecture in accordance with this circular, have received a negative response and no longer have hope.

In both cases, the frustration is great, very discouraging, to the point where immigrants do not continue to prepare and file files to the prefecture. Thus losing the opportunity to become a legal member of French society, even though they contribute to its development with voluntary work, social contributions, taxes, etc. It must be understood that the Valls circular is not binding on the prefecture and, at a given moment, for various reasons, the prefect may say "no". The main thing in this whole process, quite challenging and difficult, true, but often the only one for those who live without regular documents in France, is to keep trying to enrich the file with new documents. And not to give up the demand for to be regularized and to live with dignity.

In the next article, I explain more clearly the criteria and the needed documents, as well as where the file is filed. There you can also find and download a very important form for you: the CERFA 15186-03 form, which plays the role of a promise to hire (in case you have not been offered an employment contract). It can only be completed by your employer.

1 The website of French public administration. (January 2022). What is the regularization of a foreigner through labor?

* “This article is produced as part of the "Migration, youth and internet - 2" project, with the support of funds from the French Development Agency (AFD), Grand Est Solidarités et Coopérations pour le Développement (GESCOD) and with the support of the AMI-PLUS association. The sources of the information are quoted, and when a personal opinion is given, it engages only the author. The content of the articles does not engage the previously named structures".